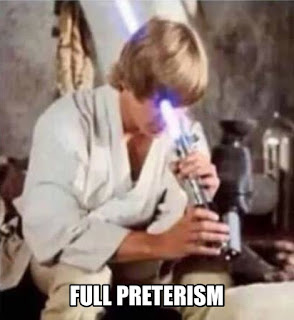 Why this article is stupid:
1) Facts are, St. Irenaeus is not the definitive proof of the late dating of Revelation. Tertullian also agrees that the date is late.
2) Don does not define “orthodoxy”.
3) He claims without defining what is and isn’t “orthodoxy” that “many of his views are blatantly false and “un-biblical” (another vague term since Preston can’t seem to tell us what constitutes “orthodoxy” and “biblical” since he also can’t seem to tell us what the “NT canon” is and isn’t since he has said repeatedly that Creeds and Councils have no merit and etc. other silly claims he has made in the past.
4) “If it is responded that ‘No, the Bible is the ultimate authority’ then that is an admission that reliance on the Patristics is, after all, totally misguided.” Again. What “Bible”? What does Don claim the “Bible” is and isn’t? He has never explained once what is or isn’t “NT canon”. We apparently can’t trust the patristics at all and they put together in councils the NT canon as it is today.
5) Don goes on this rambling about how bad Irenaeus is and uninspired and then decides to quote Eusebius, another Church Father. Preston has already said that the patristics are uninspired. Why suddenly use “uninspired” Eusebius now to try and blast “uninspired” Irenaeus? Ridiculous logic.
6) He makes a silly list of 19 things Irenaeus believed:
-1. Irenaeus was a chiliast. His form of chiliasm was acceptable in the Church and still is today.
-2. He is not the only one who holds to a man of sin to come in the future. Amillennialist do so as well in the Church.
-3. All the ECF agree that the earth will be redeemed and restored and recreated when Christ returns in the 2nd Coming.
-4. Chiliast were more literalist with scriptures. Eschatology is also a divine mystery and since that is so, it is what is called theologoumenon. It is not authoritative statements. One thing Irenaeus was doing though in his Against Heresies was fighting against Heresies like Gnosticism, if that isn’t already obvious… Gnostics that believed the flesh was evil and to be discarded… much like heretic Don K Preston. Surprise surprise right?
-5. Irenaeus believed in the Eucharist so this is a farce statement.
-6. Why should we disbelieve that John taught Papias some things? John discipled many people in his ministry. One thing that most definitely wasn’t taught by apostles was that Christ came back in AD70.
-7. Again, theologoumenon over eschatology.
-8. See 7th point.
-9 and 10. Amillennialist sometimes accept this too that when the earth is recreated and redeemed from the curse of Adam (Rom 8:20-21) that this would happen and also do teach that Jerusalem will be the capital of the Kingdom of God. It is not just chiliast that accept this as a possibility when discussing eschatological matters.
-11. Chiliast and amill were at disagreements over what Revelation 20 meant. This is theologoumenon over eschatology. They all agree Christ will return.
-12. You can read St. Irenaeus for oneself and find that he’s talking against Gnostics who distort and jack up the texts of Scripture aka spiritualizing. Pretty obvious to anyone who can read well.
-13. Yes. If the Final Judgment hasn’t taken place, no one has received their reward nor punishment as Irenaeus and other ECF have always taught.
-14. ECF all believe the gifts and miracles continue. You will find no cessationalist in the Church. Being sacramental makes that claim that this is wrong to believe the gifts continue even more bizarre of a statement.
-15. Gentry is wrong on this point he makes about St. Irenaeus. I discuss this in my book. Irenaeus does not say that Jesus was 50 years old. He clearly is doing the doctrine of recapitulation about Christ in a refutation of Gnostics.
-16. Every ECF teaches a restoration and renewal and recreation of the physical creation. We are not stupid Gnostics who hate creation.
-17. He just quotes Irenaeus quoting Isaiah for some reason? He is clearly teaching his doctrines which revolve around recapitulation and Christus Victor.
-18. Irenaeus does teach as Justin Martyr did that the Church is Israel. Every ECF teaches this. While Gnostics distanced themselves from the Jews, Justin and Irenaeus’ theology does not actually do this, though they do warn against Judaizers and Judaism because it is in their time heresy because it does not follow Christ obviously. They all do, as far as I can tell, teach a day when many Jews will come to Christ when the time of the Gentiles is fulfilled as Romans 11 says. Amill teach this too in the ECFs.
-19. Gentry is right that Shephard of Hermas was seen as canonical by Irenaeus. Many ECF did as well. We did not have a truly formal canon until the time of the Council of Nicea and even at that point, the canon would still be somewhat disputed for a while as well. Preston would have to prove what is and isn’t canon and has yet to do so. Many ECF do teach there was an apostate deacon named Nicolas who was head of the heretical Nicolatians. The LXX was written by inspiration. Paul literally quotes it all the time. The LXX was here before the MT.


Preston: “To say the very least, few today would believe everything that Irenaeus believed, in fact, they would find him eccentric in many ways! And yet, this is the main source that is offered as proof that Revelation was written at a late date. I would suggest that caution should be the operative word when it comes to the testimony of Irenaeus.”

No one has ever claimed that Irenaeus was correct on everything he ever taught. No one claimed he was infallible either. He is also not the main source of Revelation being written at a late date. I would suggest everyone be cautious of Preston and his vicious lies he spreads with his heresy of full preterism.
at January 02, 2020

By: LAZARUS CONLEY As you all are aware, I often in my spare time am studying or reading books that have to do with or are related to esch...