Originally I had set up an alternate account on Facebook to use it to watch and document and investigate the full preterists who had blocked me. The usual was done: set up a persona and integrate oneself into the groups you're trying to investigate. For this account I dubbed Sergius Bale, I claimed to be a native Greek speaker and claimed to be a PHD in history teaching in Austrailia.

Don was immediately hostile to this account the moment any questions were asked and raised that he might not have a good answer to. As soon as Don Preston figured out this burner account was claiming to be a PHD, Don BEGGED to have a debate with Sergius Bale (me). I originally declined as is shown in the pictures below. The second time I decided to agree to this debate. There was no rule that you couldn't debate a troll account or about hiding your identity so I decided to go through with this and ultimately, to embarass Don Preston who has been running from debating me for years, I decided after the debate was finished I would reveal who I really was since he never once did any investigating to find out if I really was a university professor born in Greece with a PHD... This is that debate. 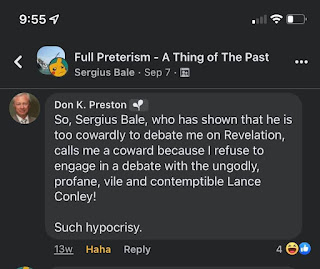 Here is proof as well of Don pestering William Vincent via PM on Facebook begging William to allow this debate to happen. He begged and any attempt to claim he wasn't is just a lie. 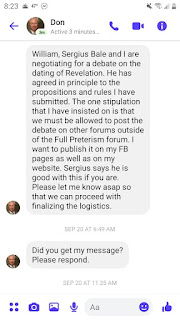 As you will ultimately see, there is a reason Don doesn't want to tell the truth about this debate now.

He not only got embarassed finding out he was really debating Lance Conley. He got embarassed by losing the debate that he BEGGED to have against me and HE MADE ALL THE RULES AND PROPOSITIONS which I AGREED to uphold and DID.

In the next posts to come, I will be showing how this debate went. Enjoy this clusterbomb of insanity.

Here below was the Proposed Rules and Propositions for the Sergius Bale VS Don Preston Formal Written Debate.

Topic: The Dating of the book of Revelation– Before AD 70 or After?

Proposed Propositions for the debate: Resolved, The Book of Revelation was definitely written prior to the destruction of Jerusalem in AD 70 and is predictive of that event.

Resolved: The Book of Revelation, while not definitive, was likely written in the reign of Emperor Domitian (AD 90s) after the fall of Jerusalem in AD 70.

·       When the questions have been submitted, all of the questions will be answered candidly, without obfuscation or equivocation, by each man, according to each man’s sincere understanding of Scripture in regard to the question.

·       Each man will return the questions, with his answers, via e-mail, within one day of receiving the questions.

·       The questions may be submitted by each man at any time after the finalization of the agreement for the debate.

·       Don K. Preston will begin in the affirmative. After Sergius Bale has presented his final (third) negative presentation, he will then submit his first affirmative.

·       Unless there are extenuating circumstances, each man will present his respective presentation within no later than three weeks after the submission and posting of the other man’s presentation. Time extensions will be permitted.

·       William Vincent, owner of the Full Preterism: A Thing of the Past FaceBook page, must suspend the rule of the forum that forbids publication of forum content outside of the forum. I will want to publish the debate on my FaceBook page- and pages– as well as on my websites. The debate will have far wider interest than the -200 members of the forum.

·       If either man publishes the debate in any forum outside of the Full Preterism: A Thing of the Past FaceBook page:

1.       No arguments or material shall be altered by additions, deletions or any other alterations in any way.

2.       If either or both men publish the debate outside of the Full Preterism: A Thing of the Past FaceBook page, the entirety of the debate, with no alterations, no additions, no deletions being made will be posted / published.

Rules of Conduct Hedge’s Rules for Controversy will be honored and observed by each man in this debate. Below is an edited summary of those rules:

Rule 1: The propositions for the debate will be as clearly defined as possible so that there could be no misunderstanding about the issues at stake.

Rule 2: Each man in the debate will consider the other to be his equal and act toward him with dignity, respect and Christian decorum.

Rule 3: No material, no argument that is not directly pertinent to establishing or negating an argument, from Scripture, shall be introduced by either man.

Rule 4: Neither man will ridicule the other, question his motives, integrity, or his standing in Christ.

Rule 5: It is the responsibility of each man, when in the negative, to follow, address, and answer, to the best of his ability and consistent with his personal conviction, each of the arguments of the affirmative presenter.

Rule 6: The consequences of any doctrine are not to be charged on him who maintains it, unless he expressly avows them.

Rule 7: As truth, and not victory, is the professed object of controversy, whatever proofs may be advanced, on either side, should be examined with fairness and candor; and any attempt to ensnare an adversary by the arts of sophistry, or to lessen the force of his reasoning, by wit or ridicule is a violation of the rules of honorable controversy.

Rule 8: Under no circumstances shall either man purposely misrepresent the beliefs or doctrine of the other.

Part 2 we will have the Questions & Answers Section of this Debate.