On September 21, 2021, Full Preterist John Watson challenged ANYONE to debate him and refute him on 1 Corinthians 15 and claimed no one could prove that the resurrection of the dead that Paul talks about there is a biological raising of the dead.

So I took his challenge on September 30, 2021 and made this video which I will link here:

I think it is safe to say that if a full preterist is not outright hostile towards me and shows respect I do try my best to show them respect and courtesy and I definitely did so with John Watson. Unfortunately, when truth refutes someone like Watson who is clearly in heresy, the devil always comes out of these people and they always eventually resort to cowardice and lying. 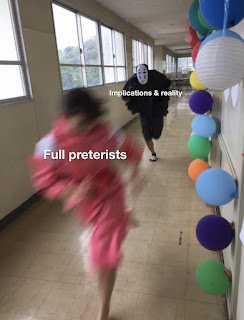 What resulted is EXCUSE after EXCUSE of why John Watson had to find time to watch the video... yet he found more than enough time to continue trying to challenge people like Norm Fields, Howard Denham, Scott Russell, and many various others to this same debate and to refute him. Funny how that works is it not?

As was to be expected of a heretic and a coward like John Watson, he ultimately copped out, began to make tons of excuses, being he was unable to refute me on 1 Corinthians 15.

Was it a shocker? Not really. This is the full preterist standard and their modus operandi. When they can't refute you, they run away.

Clearly this meme fully applies here... as we will see momentarily. 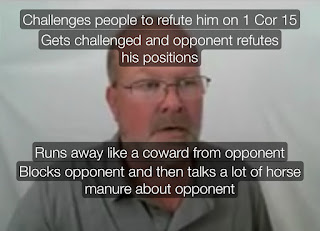 To add to this cowardly action, John Watson then decided in a video on 10-26-2021 to bring up my book and declare that Don Preston refuted, trashed, and destroyed my book Hope Resurrected.

This coward has openly admitted to me on Messenger that he has never read any full preterist works such as those written by Max King, Don Preston, Alan Bondar, Edward Stevens, or apparently anyone for that matter. He has also admitted he has not read my book either.

Evidence shown here where he straight up admits he's never read anything of King's nor Preston's... 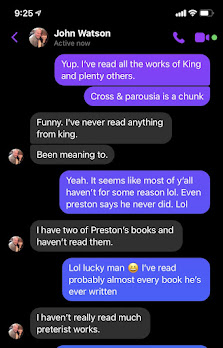 Next up we have our conversation after he decided to try and attack and lie about me proving John Watson is not just a clown and a coward but also a weasel and a pathetic liar who doesn't care about telling the truth as long as he can push his agenda to spread full preterism. It is quite apparent John Watson is willing to lie and try to discredit others to push his full preterist agenda. Christians seek to tell the truth at all times and that applies to not lying about others. You can tell the heretic by their heterodox way of living.
Please note reader, John Watson has no idea what is in my books nor the people he claims in his videos refute me. Since he has no idea what is written in my books nor any of the full preterists' works it's nothing but a bold and pig-faced lie.

John Watson shamefully preaches at Westside Church of Christ in Indianopolis, Indiana and I feel sorry for those who go to his church because this pastor is willing to lie and deceive people to push and peddle his agenda. It is shameful that someone who pastors a church would be such a coward, a beta male, and an obviously conniving liar like this unfortunate specimen who calls himself a pastor and a man of God (clearly he is not and lives in delusional apostasy and heresy).

One can only hope and pray this cowardly liar who pastors a church will find the ability within himself to come to the True Christ and repent of his heresy and leave this cheap knockoff-Jesus that John Watson and his cohort of full preterists have concocted out of their butts that makes Jehovah Witness and Mormons' Jesus look a little less stupid (but let us make no mistake, the Jehovah Witnesses and Mormons have just as fake of a Jesus as the full preterists like John Watson do).

This was our last correspondence after he decided to lie about me on his video. I obviously called him out for this obvious lying and misleading others and was subsequently blocked after because liars like John Watson cannot handle the pressure when they get confronted and exposed as the charlatans, heretics, and losers they truly are. He writes that there will be an apology in a next video... don't think we'll actually be seeing one since he has blocked me from all these "shows" and social media. Typical behavior of a full preterist.

We see this behavior from people like Trent Parrot as well who frequents his little "show" as well who are either stupid or willing to lie about others. I confronted John's BFF about this same exact thing where they openly lie or make things up about others they know nothing about. They act as if they are experts and have read these works and then when you can get it out of them they prove they haven't read the works, haven't done any research, and are just spouting misinformation purposely for their agenda to spread their garbage to others and just straight up lie about others. 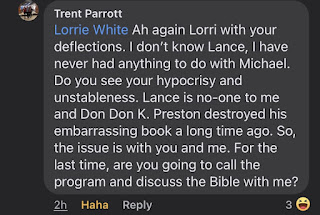 Then when I confront the man about it this exchange takes place where he makes clear he's never read my book and never read any full preterist's works... he may have not ever read any book except the Bible either... 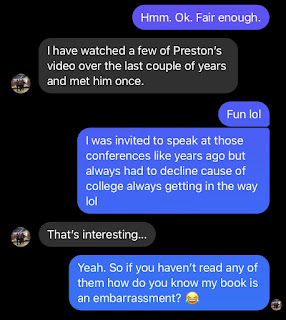 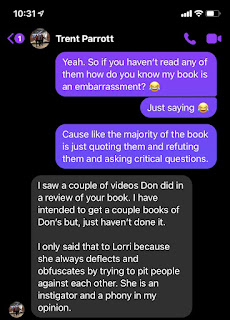 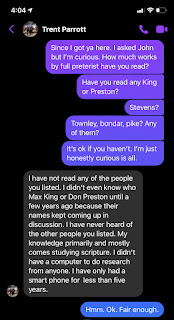 I was blocked by this individual as well for calling him to task. Full preterists will do and say anything to push their agenda and will lie about everything and run like the cowards they are any time they are called out and exposed for their lies.
For extra, I leave you with this man attacking another man on here as an "uneducated Christian full of massive biblical ignorance" when this ignorant fool hasn't even read Max King! By his own admission Trent Parrot is uneducated and full of massive biblical ignorance. I won't even call him a Christian because full preterism is not Christianity. It is nothing but full blown heresy.