Things have gotten hilarious. On YouTube, Preston has "Review and Refutation of Lance Conley's Hope Resurrected. Here is the link:

I responded with my first article which you can read in the comments section if he doesn't delete them. 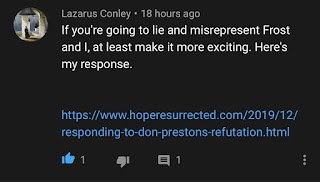 To this, Don K Preston's response: (because I'm all about context unlike some people). 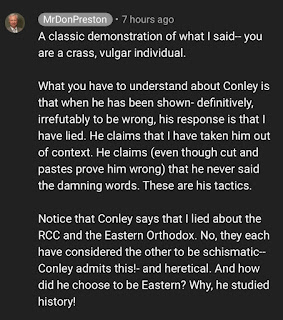 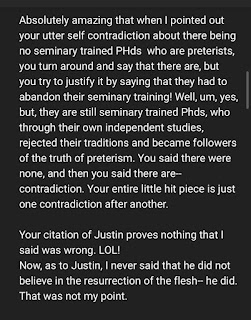 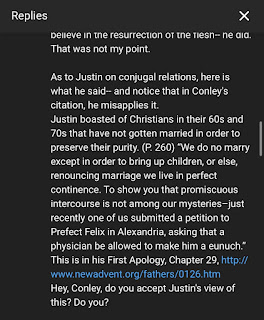 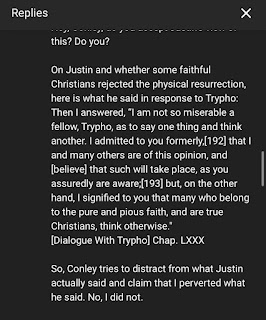 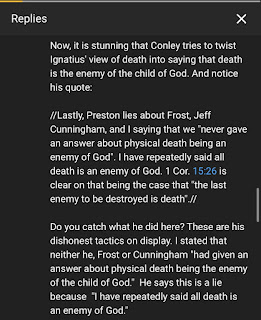 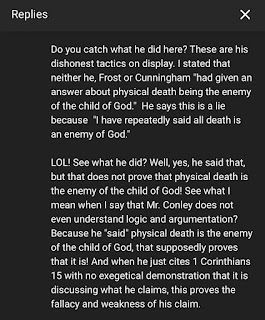 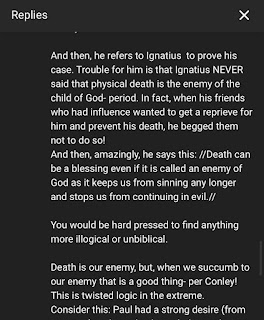 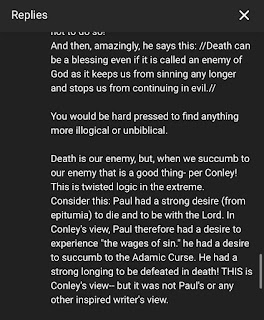 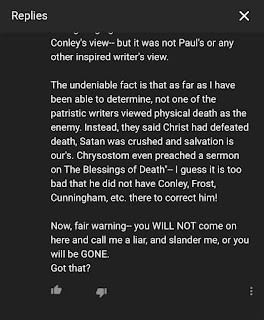 With that out of the way, now let's respond to Mr. Preston's outlandish claims.

Again, as I said before in the first article, I don't care if you think I'm an asshole. It is irrelevant whether you think I am Satan incarnate or not with regard to the arguments presented. You're just poisoning the well to try and appeal to your crowd.

Preston: "What you have to understand about Conley is that when he has been shown- definitively, irrefutably to be wrong, his response is that I have lied. He claims that I have taken him out of context. He claims (even though cut and pastes prove him wrong) that he never said the damning words. These are his tactics. "

Anyone who can read and think for themselves can see he's been proven wrong again, caught manipulating my words in my book to try and push his agenda. He has taken me out of context as I show in my first article. Furthermore, he claims that I am calling him a liar when I am "definitively, irrefutably [found] to be wrong". This is a classic example of projection on Preston's part, especially when it has been shown himself to definitively and irrefutably be wrong and then accuse me of pulling manipulative tactics. What else can you call it but lies and deception on Preston's part?

Another thing to note. When I am or have been proven wrong before (cause guess what, I am human and it happens) I do admit to being wrong. Preston's attempt here is obvious trying to manipulate readers and create a false characterization about me, as if I am some person like Preston who likely suffers from an undiagnosed narcissistic personality disorder. This is shameful.

"Absolutely amazing that when I pointed out your utter self-contradiction about there being no seminary trained PhDs  who are preterists, you turn around and say that there are, but you try to justify it by saying that they had to abandon their seminary training! Well, um, yes, but, they are still seminary trained PhDs, who through their own independent studies, rejected their traditions and became followers of the truth of preterism. You said there were none, and then you said there are-- contradiction. Your entire little hit piece is just one contradiction after another."

It’s clear he purposely took the words in my book out of context and I prove that in my response. Just another example of dishonesty from Preston which he should be ashamed of himself for doing. If your arguments are that bad and you have to resort to being dishonest, it is a bad argument and you should change. Next.

"Your citation of Justin proves nothing that I said was wrong. LOL!"

Uh yeah it disproves your claim in this video where you claimed such a thing. Your own words in this video you made betray you. Anyone can watch and see this.

"Now, as to Justin, I never said that he did not believe in the resurrection of the flesh-- he did. That was not my point."

Preston literally said it in his video. He could claim he misspoke but I doubt he will as he can never make mistakes or do wrong because he is Don K Preston. Ridiculous.

"As to Justin on conjugal relations, here is what he said-- and notice that in Conley's citation, he misapplies it.  Justin boasted of Christians in their 60s and 70s that have not gotten married in order to preserve their purity. (P. 260) “We do no marry except in order to bring up children, or else, renouncing marriage we live in perfect continence. To show you that promiscuous intercourse is not among our mysteries–just recently one of us submitted a petition to Prefect Felix in Alexandria, asking that a physician be allowed to make him a eunuch.” This is in his First Apology, Chapter 29, http://www.newadvent.org/fathers/0126.htm. Hey, Conley, do you accept Justin's view of this? Do you?"

There is nothing wrong with living chaste and being celibate. There is also nothing wrong with marriage and Justin does not condemn marriage nor celibacy. Preston’s whole claim here is ridiculous and false. And this is just a deflection to try and get the reader to avoid one of his many blunders and lies in this video that I’ve exposed.

"On Justin and whether some faithful Christians rejected the physical resurrection, here is what he said in response to Trypho: Then I answered, “I am not so miserable a fellow, Trypho, as to say one thing and think another. I admitted to you formerly,[192] that I and many others are of this opinion, and [believe] that such will take place, as you assuredly are aware;[193] but, on the other hand, I signified to you that many who belong to the pure and pious faith, and are true Christians, think otherwise." [Dialogue With Trypho] Chap. LXXX"

Ch. 80 of Dialogue With Trypho is a discussion about the millennial reign LOL. Not the resurrection of the dead.

"So, Conley tries to distract from what Justin actually said and claim that I perverted what he said. No, I did not".

Preston takes Justin clearly out of context. Ch. 80 does not talk about the resurrection of the dead. It's about the two different views of the millennial reign. This is laughable.

Preston then makes some rant about death and Ignatius willingly going to his martyrdom for the sake of the Gospel to be spread. What more needs to be said? Frost, Cunningham and I gave our answers and Preston claims otherwise. Doesn't take a rocket scientist to know or see what's going on here.

I also stand by what I’ve said with regards to death. Death can be a blessing, in a sense, even if it is called an enemy of God.

Preston can and will manipulate the literal hell out of this statement to try to make it appear that I'm some illogical buffoon but the fact is, there's nothing illogical about this statement. We have the victory over death in Christ and it will ultimately be conquered and destroyed in the Second Coming as 1 Cor. 15:26 states explicitly. Just because Preston claims something does not in fact make it true. Preston further tries to manipulate his crowd by saying:


“Death is our enemy, but, when we succumb to our enemy that is a good thing- per Conley! This is twisted logic in the extreme.”

Yet again, it is another excellent example of Preston twisting my words and pulling a manipulative tactic. As is per usual with him. Shameful.

“Consider this: Paul had a strong desire (from epitumia) to die and to be with the Lord. In Conley's view, Paul therefore had a desire to experience "the wages of sin." he had a desire to succumb to the Adamic Curse. He had a strong longing to be defeated in death! THIS is Conley's view-- but it was not Paul's or any other inspired writer's view. The undeniable fact is that as far as I have been able to determine, not one of the patristic writers viewed physical death as the enemy. Instead, they said Christ had defeated death, Satan was crushed and salvation is ours. Chrysostom even preached a sermon on The Blessings of Death"-- I guess it is too bad that he did not have Conley, Frost, Cunningham, etc. there to correct him!”

Have you lost count of how many times Preston has clearly lied and pulled manipulative tactics here? I have. These are all lame attempts to try to distort what people have said to fit his agenda. It’s absolutely pathetic and shameful but this is to be expected from a pseudo-scholar who regularly lies about people he opposes because he has no proofs, no evidences for his beliefs, and has to resort to all these tactics in order to manipulate his followers into believing full preterism.

As to this last statement:

“Now, fair warning-- you WILL NOT come on here and call me a liar, and slander me, or you will be GONE. Got that?”

I expect I will be blocked by Preston. The last tactic narcissistic people like Preston do when they’ve clearly been exposed is to do damage control when their jig is up because they ultimately have to use and issue threats and intimidation tactics to exercise control, just proving my point. All blocking me will prove is that he has to block someone from commenting on posts that he makes that are about said individual persons in order to have some form of control in order to manipulate others and gaslight because he is lying ultimately and when liars like him are exposed, he has to take the coward's way out instead of telling the truth. Also, don't expect to lie about someone and then they not defend themselves. That tactic may work on some people but it won't work on me.